The Pebble Partnership in the past has pointed to western Canada’s Fraser River watershed as an example of mining and healthy fisheries successfully co-existing. But earlier this month a tailings pond at the Mount Polley mine failed and discharged contaminants with an estimated 2.6 billion gallons of waste water and 1.3 billion cubic yards of tailings into the watershed in the Polley Lake/Hazeltine Creek area, a tributary of the Fraser River. (Photo still below from aerial footage taken by Cariboo Regional District.) 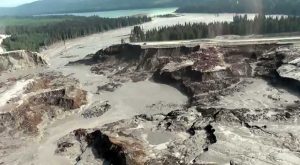 While currently stabilized, the breach had not been entirely contained as of Aug. 25, and its cause is still unknown. Investigations into the cause will reportedly take several months.

According to a fact sheet from government officials, debris build-up from the spill has caused an unstable blockage at Polley Lake, which could result in another breach.

Communities in the area were initially advised not to use the water for drinking or bathing while water tests were conducted. Most tests came back within normal levels, so officials rescinded the ban for all but those in the impact zone directly affected by the breach. However, the sediment plume in Quesnel Lake has been moving, so residents who get their water from the lake have been advised to filter out the sediment.

The timing of the breach coincides with the annual salmon runs to the Fraser River. This year’s salmon run has been greatly anticipated, since they are the spawn from an abundant 2010 run. This is normally the busiest time of the year for catching and preparing fish for winter and local officials were concerned that salmon might be affected by the tailings pond breach.

Canada’s Interior Health Department issued a statement Aug. 12 deeming all fish outside the “Do Not Use” water advisory as safe for human consumption. According to government officials, “the tailings liquid initially released from the impoundment moved very quickly through the system and was diluted greatly by the water in [Quesnal] lake, the Quesnel River and ultimately the Fraser River. As such, fish exposure was limited and not long enough for uptake into tissues.”

However, the Ministry of Environment will continue to conduct long-term sampling of several fish species. Additionally, First Nations Health Authority (FNHA) staff will conduct salmon tissue sampling in the confluence areas of the Quesnel and Fraser rivers. Those samples will be compared with salmon from last year to determine whether there are any negative effects from the breach.

One impact of the breach includes the loss of 42 mining jobs, many held by local residents. Other locals have been able to find work on cleanup crews.

Mount Polley, one of several large open-pit mines in the Fraser River watershed, is a copper-gold mine owned by Imperial Metals Corp. Its tailing ponds were designed by Knight Piésold, an engineering firm that, according to the Pebble Partnership, is part of a “world-class mine development team” assembled to “design and permit the Pebble Project.”

Knight Piésold, the initial Engineer of Record for the tailings dam, posted a statement Aug. 8 on its website saying the company has not been involved in the Mount Polley project since February of 2011. The company is backing away from responsibility for the tailings storage facility, maintaining that, “Significant engineering and design changes were made subsequent to our involvement, such that the tailings storage facility can no longer be considered a Knight Piésold Ltd. design.”

Government officials had repeatedly issued warnings to Imperial Metals regarding the height of water in the tailings pond, most recently in May.

Pebble Limited Partnership (PLP) CEO Tom Collier addressed the Mount Polley breach Aug. 12 during comments he made to the EPA regarding proposed restrictions on disposal of dredge/fill materials at the Pebble site in Bristol Bay. He cautioned against jumping to conclusions for either the cause of the Mount Polley breach or the impact it may have on salmon or the mining industry going forward, saying that PLP has called for scientific studies for both the root cause and for impacts to the Fraser river salmon fishery.

The Government of British Columbia, with support of the Soda Creek Williams Lake Indian Bands, has ordered an independent engineering investigation and inquiry regarding the breach, as well as third-party reviews of dam safety inspections for all permitted tailings ponds in British Columbia. The independent panel appointed to lead the investigation includes Dirk Van Zyl, a professor at the University of British Columbia who also served as a peer reviewer for EPA’s recent Bristol Bay Watershed Assessment.

As more details emerge from the Mount Polley tailings breach, it does offer additional context for discussing the proposed Pebble mine, now and during any future permitting phase: