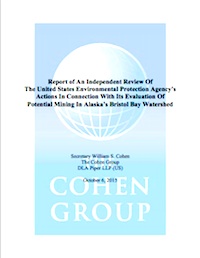 Last year Pebble Limited Partnership (PLP) CEO Tom Collier announced the company would be “punching back” against the U.S. Environmental Protection Agency (EPA) and its efforts to limit development at the Pebble deposit in Bristol Bay.

In addition to litigation (ongoing) and a call for the EPA Inspector General to investigate the federal agency (also ongoing), PLP hired William S. Cohen to complete an independent review of EPA’s actions in conducting its Bristol Bay Watershed Assessment.

In the report, released Tuesday, Cohen concludes that, “EPA’s application of Section 404(c) prior to the filing of a permit application was not fair to all stakeholders.” He called for “the EPA’s Inspector General and Congress to continue to explore… questions which might further illuminate EPA’s motives and better determine whether EPA has met its core obligations of government service and accountability.”