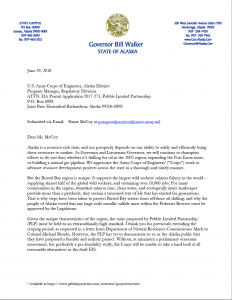 sent a letter to the U.S. Army Corps of Engineers asking it to suspend its NEPA review of the proposed Pebble mine. The Corps is currently drafting an Environmental Impact Statement (EIS), which will lay out the positive and negative effects of the proposed development, along with reasonable alternatives.

Citing Bristol Bay’s unique characteristics as the source of nearly half of the world supply of wild salmon, Walker writes that the Pebble Limited Partnership (PLP) must be held to an “extraordinarily high standard.” “PLP has yet to demonstrate to us or the Alaska public that they have proposed a feasible and realistic project,” he continued. “Without, at minimum a preliminary economic assessment, but preferably a pre-feasibility study, the Corps will be unable to take a hard look at all reasonable alternatives in the draft EIS.”

In a June 21 press advisory, Shane McCoy, the Corp’s project manager for Pebble permitting, said the agency had not received a preliminary economic assessment from developers, but said it is not needed for the EIS. “It behooves them to do so for their shareholders. However, that’s not what we’re evaluating. We are evaluating the application for discharge and dredge and fill material in the waters of the U.S. as well as work in and affecting navigable waters.”

In a December 2017 technical report, project owner Northern Dynasty Minerals (NDM) indicated that the company planned to complete an economic analysis after assessing the “proposed alternatives that the USACE will be considering as part of the scoping process.”

This isn’t the first time Walker has made his stance clear on the Pebble project. At a June 9 governor’s candidate debate in Naknek he expressed opposition, and March, his administration criticized the Corps’ initial 30-day scoping period. The Corps subsequently extended the scoping period to 90 days.

That doesn’t mean it will respond to the latest request by suspending the permitting process. During the June press advisory McCoy said the agency has a statutory obligation to continue the permitting process until “either we don’t have the information we need from the applicant or the applicant withdraws.” This was in response to questions about the financial stability of the Pebble Partnership after the withdrawal of First Quantum Minerals walked away from a potential partnership deal that would have provided another other $112.5 million toward permitting over four years.

NDM needs another partner in order to advance the development. In response to Governor Walker’s letter, PLP CEO Tom Collier wrote that the Governor did not make a compelling case for suspending the NEPA process.