The public comment period for EPA’s Proposed Determination ended September 19, 2014, after which EPA began reviewing hundreds of thousands of public comments. However, in November 2014, U.S. District Court Judge H. Russel Holland granted a preliminary injunction, ordering EPA to stop work on activities related to the 404(c) process until he is able to hear the merits of a civil suit brought by the Pebble Limited Partnership.  The Judge’s ruling delays EPA’s work until late spring or early summer 2015.

Section 404(c) is part of the Clean Water Act (CWA), legislation passed in 1972 that aims to maintain or restore the integrity of the nation’s waters, including its wetlands. Section 404 of the CWA regulates dredge and fill materials entering wetlands, streams or other waters. Under Section 404, the U.S. Army Corps of Engineers issues permits for activities that would place fill in wetlands. The permitting process, overseen by EPA, requires that projects show they can take appropriate steps to avoid, minimize, and offset adverse impacts.

Part C of Section 404 authorizes the EPA to withdraw, deny, prohibit or restrict those areas to discharge – before or after a permit has been submitted – if it determines that a discharge of fill would results in a “significant loss or damage to fisheries, shellifishing, or wildlife habitat or recreation areas.”

In February 2014, EPA announced its intention to use its authority under Section 404(c) to protect the salmon fishery in Bristol Bay “from the potentially destructive impacts of the proposed Pebble Mine.”

Development of Proposed Determination – EPA prepared a 214-page document that includes sections on the region’s ecological resources, basis for the proposed determination and the proposed restrictions. Dozens of reference materials are cited.

Release of Proposed Determination – EPA released the Proposed Determination on July 18, 2014, detailing retrictions it is proposing for disposal of dredge and fill in the area near the Pebble deposit. The agency stated that it based these recommendations on a “conservative analysis” of potential risks of adverse effects (it did not include potentail risk due to accidents or for a mine operating longer than 20 years).

Public Comment Period – The Proposed Determination was open to public comment from July 18 to September 19, 2014. The agency says all comments will be thoroughly reviewed and considered. 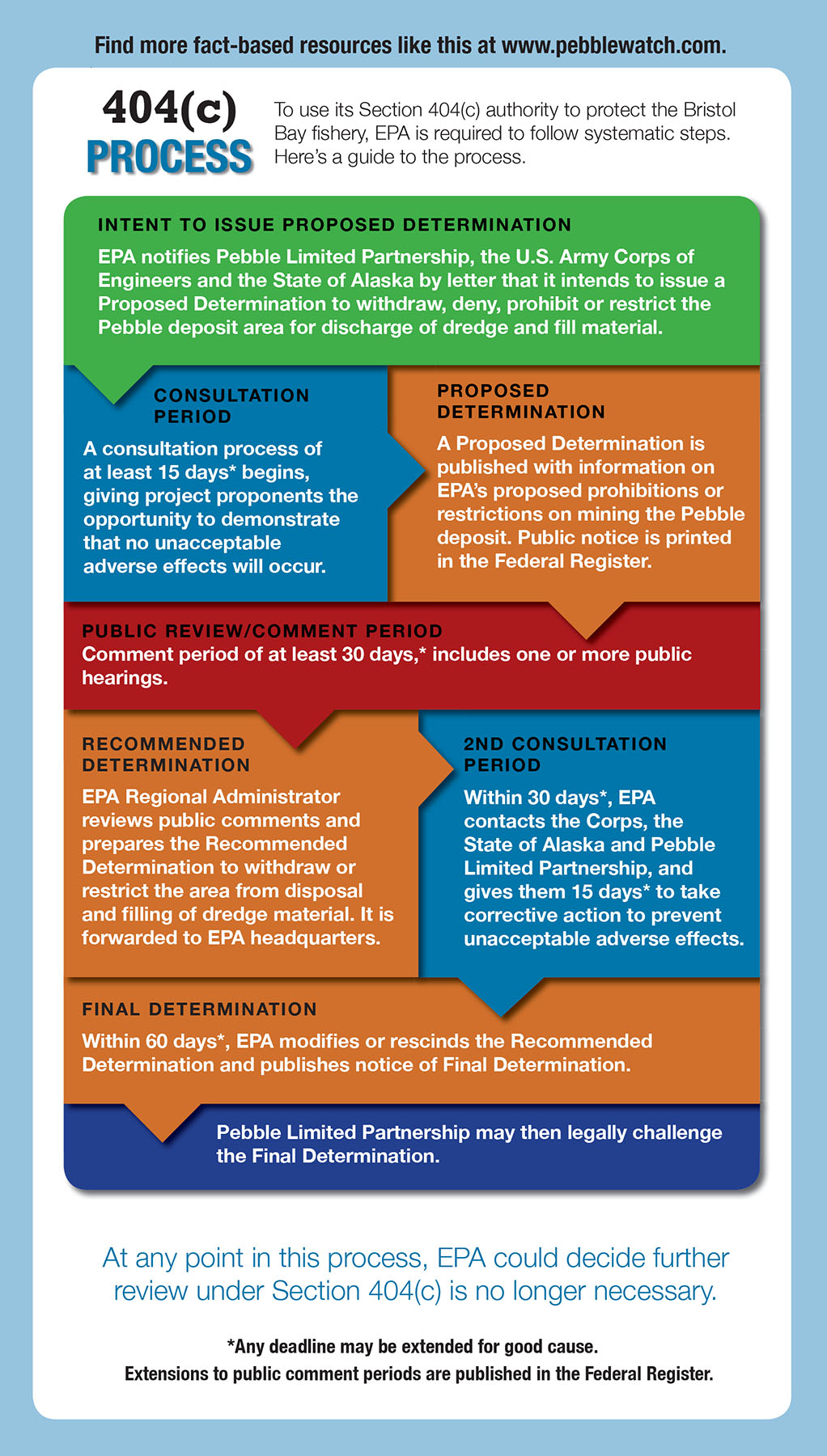 EPA Notification of extension: Response to State of Alaska • Response to Pebble Limited Partnership (both March 13, 2014)

On U.S. EPA’s “Bristol Bay” pages, learn more about the Watershed Assessment, the document that informed EPA’s decision to initiate the 404(c) process.